The ministry of Ridgewood began as a rural Sunday School in 1888. Eastern Avenue Baptist Church of Joliet had a vision of starting a ministry to reach the children in the developing rural area of what is now the east side of Joliet. The Ridgewood neighborhood did not have a church and the members of Eastern Avenue were concerned for the spiritual well-being of the families in that area. That early attempt did not succeed but later in 1890 another attempt was launched with a decision to find a meeting place for the children and adults who would be interested in learning about God’s Word. A former “pest” house on Walnut near Cass Street was secured and although the building was in disrepair volunteers cleaned it up and regular meetings began under the direction of Mr. George L. Vance. By 1895 there was sufficient interest in the growing Ridgewood area that property at the corner of Brown and Leach Avenues was purchased and a small chapel was built. That small chapel came to be commonly referred to as the Ridgewood Baptist Church. Over the years many adults and children were saved through the ministry until finally on March 8, 1903 an organizational meeting was held and 32 adults signed the organizational charter.

From that early beginning the ministry of Ridgewood Baptist Church grew dramatically as the neighborhood grew. Most of the members came from within about a mile and a half radius of the church. It was such a neighborhood ministry that some of the early pastors didn’t even own cars. They were able to walk to all of the homes of the congregation.

The declaration of war in 1917 deeply affected the congregation. There were 17 young men who went off to war but in answer to the prayers of God’s people, all 17 came home safely at the end of the war.

As the church continued to grow a significant number of young people from the congregation surrendered their lives to fulltime Christian service and the missionary support of the church reflected the congregation’s growing vision to reach the world with the gospel both home and abroad. By the late 1950’s the church was supporting 21 missionaries (several from the church) and the Sunday evening service was broadcast live over WJOL radio.

In 1963 property was purchased on Hillcrest Road for the purpose of relocating the growing congregation. Beginning in 1967 the current building and parsonage were constructed for a total cost of $440,000. The 20-year loan was paid off in 19 years and the congregation continued to faithfully grow. In 1973 a day school was added and in 1978 a gymnasium was built.

Although the church has experienced many testings and trials throughout its history, the church today still preaches the same gospel as it did in the early years of its pioneer ministry. All of the glory goes to God for maintaining a faithful witness for Christ in the greater Joliet area.

All of the glory goes to God for maintaining a faithful witness for Christ in the greater Joliet area. 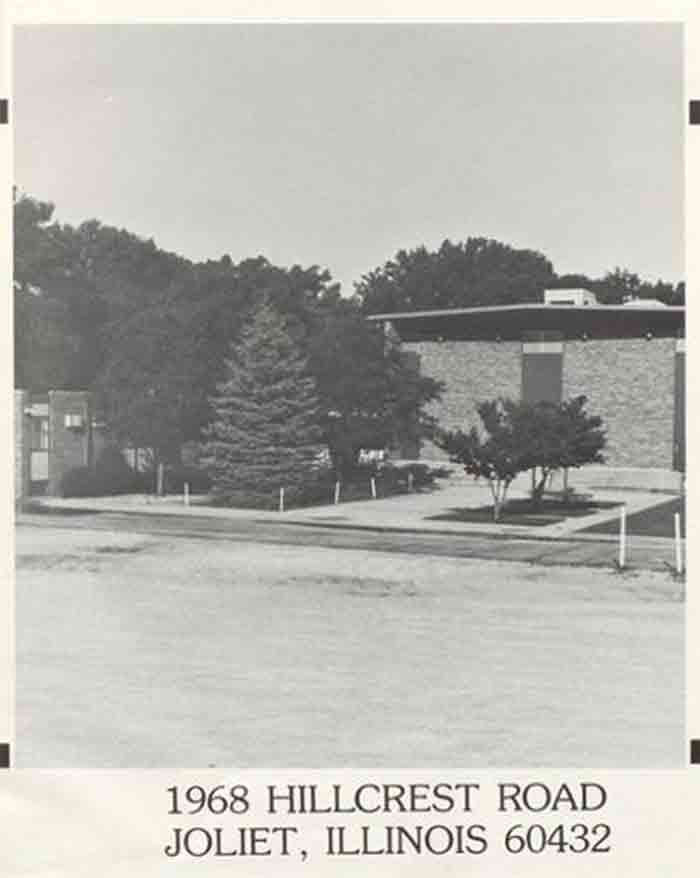